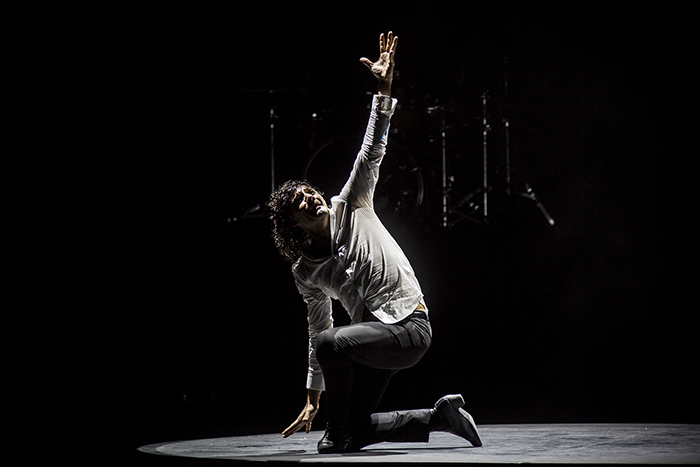 This year the 23rd edition of The Festival de Jerez ended on March 9th and it had a better reception and international repercussion than the previous year. This year the dance was the main protagonist again, and allowed that some of the the greatest dancers like Eva Yerbabuena or Concha Vargas were present during the festival.

There was a huge international representation, with 46 different nationalities represented. Between all of then we need to mark out USA and Japan as the countries with more representation during the event.

From Casa del Arte Flamenco we want to summary up some of the best shows, on this way flamenco lovers could take a look on The festival de Jerez too.

Joaquín Grilo opened the festival on February 22th with a show at the Teatro Villamarta. It was such a great start of the event. The festival has always paid special attention to the opening performances and this year it was the great dancer and choreographer from Jerez who opened the festival.

The show was called La Calle de los Sueños (The Street of the Dreams), and scenography took an important part of the show. By using light and shadows this team recreated a dreamy environment in order to transport the audience to the atmosphere of dreams.

Joaquín surprised the audience with contemporary dance at the beginning of the show. Then his dance team joined him together they made an unbeatable transition to flamenco.
In the soundtrack we were able to hear piano, guitar and drums, a perfect mix that blended with the dance style. An abstract and free interpretation show, like the very nature of dreams.

Another of the greatest performances took place only one day after the inauguration. María Pagés and El Arbi El Harti make such an amazing duo and they proved it with this master piece.

An hour and a half is the duration of his show, called Un oda al tiempo (A Ode to the Time). It was presented once again at the Villamarta Theater on February 23.

This show was already presented on the last Bienal de Sevilla, and it was awarded with the Giraldillo prize. During the show time is used as an ephemeral and precious good and these artists use references to Latin American authors such as Borges or Octavio Paz.

In the soundtrack we were able to hear the essential guitars, as well as violin, cello and percussion elements. All these elements made a perfect symphony with the costumes and dance moves. The show is guided by El Arbi’s lyrics, a dialogue between the protagonist and her own memory.

The most alternative flamenco with Eduardo Guerrero

Eduardo Guerrero surprises his audience once again in a live show called Sombra Efímera (Ephemeral Shadow). On Wednesday, 27th February, this dancer presented his show at the Villamarta Theater after a first and second representation in Amsterdam and Seville.

Eduardo made of his dance an alternative and unique piece, thanks to his physical contortions, scenography and costumes. The show evolves and changes with each representation, another example of its magic.

During the show the audience was able to enjoy nine different flamenco styles, where we could appreciate tangos, tonás, seguiriyas and even bulerías and bulerías at the end. Another fundamental element was Samara Montanes’ voice, which blended Eduardo’s stomping and movement.

Female representation took place in this Jerez Festival, and this time it was held on Friday, March 2, at the hands of Ana Morales at the Villamarta Theater, and through Beatriz Morales in the Dance with Ellas Cycle.

The work of the first dancer, Ana Morales, speaks in an intimate way about her relationship with men, through an avant-garde and unconventional show. This was characterized as a show with a lot of percussion and zapateo along with little music almost lyrics. This technique has been used more and more by current artists.

On the other hand, Beatriz Morales, with her show Hembra Alpha exposed a mature and different show. During her performance her long blonde hair hypnotized the viewer in every movement. Besides Beatriz was accompanied by a cast of 10 other artists. Their intention was finishing with the idea that flamenco is only a male music style.

On this way we have toured some of the main flamenco shows of that first week of The Festival de Jerez.