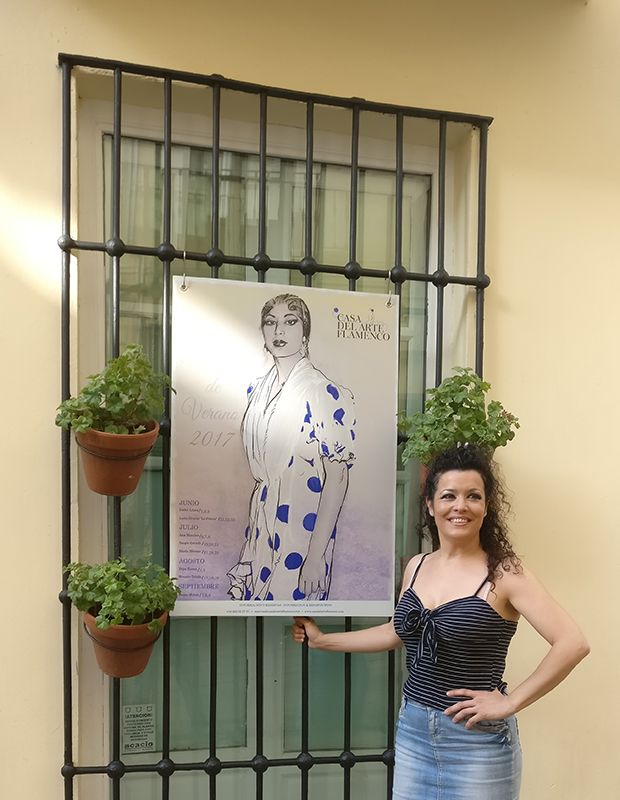 Dressed with a comfortable sport sneakers for Isabel López is cristal clear. “I will never go back to the Albayzín wearing heels”. She confesses us while she´s getting ready to start her show in Casa del Arte Flamenco, a temple of tradition and a referring spot for the experts. It will be the gunshot that will start the Flamenco Summer Specials. An event that starts to became a mandatory stop for both experts and neophytes of Flamenco in Granada.

Isabel was born in 1970 and when she became 7 she started her career as soloist dancer by the hand of Manolo Marín in the, yet closed, Tablao La Trocha of Seville. In that time, her first stage, she went through the Café de Chinitas in Madrid and Los Gallos. Those were the first steps and heelings of a career that has brought here to Asia and America as spokeswoman of the most pure Flamenco Art.

“So small and already a soloist” she sais between laughs

Her career has made her travel all over the world. In 1992 she performed with Manolo Marín company in the 92′ Seville Expo, with the show “Azabache”. She was with Rafaela Carrasco in the show “De la Punta a la Raíz” with the Seville Biennial. She was with Segundo Falcón in the “Ensayo y Tablao” spectacle or in the show “Desde Abajo” that was brought to the United States and Panama.

After Spain, the country were Isabel has developed most of her career is Japan. Where she has spent several months touring through the most important tablaos of the Nippon country, among them, the Tablao of the Café de Chinitas in Oaxaca. When she is asked about japannese people she says she admire their dedication and eagerness to overcome. “The ones that dedicate to flamenco, do it in body and soul. They are the first one in realize and assume their limits, and they make a huge effort to improve day after day. They are also, extremely gratefull people, if they realize you put all on the stage, the admire that effort.”

Japan is, nowadays, the country in the world where flamenco has a the biggest impact outside spanish borders.

Nowadays Isabel spent most of her time between the tablaos El Arenal in Seville and Casa Patas in Madrid. Is the second time she comes to Casa del Arte Flamenco and she has clear what she likes most of Granada. “The tapas, no doubt, is something unique that with every beer you get something to eat. This city has something special, it has magic, it doesn´t look like any other, is a pleasure to be on the street”.

About the Flamenco Spectrum in Granada, she confess she is not very aware, but she know there is a lot of quality. About to Casa del Arte Flamenco, she thinks, is a very cozy tablao, with a lot of hard work behind every flamenco show, with high class artists performing every day,

When she´s asked about their referrings she answerts. Her main referent was and is Loli Flores, now deceased, she met her when she was 19 in the tablaos El Arenal and Los Gallos.

She also admires Rocío Molina and Israel Galván. “They both have an opposite stye to mine, but the are very well prepared artists, and, most importantly, they dont immitate anyone”