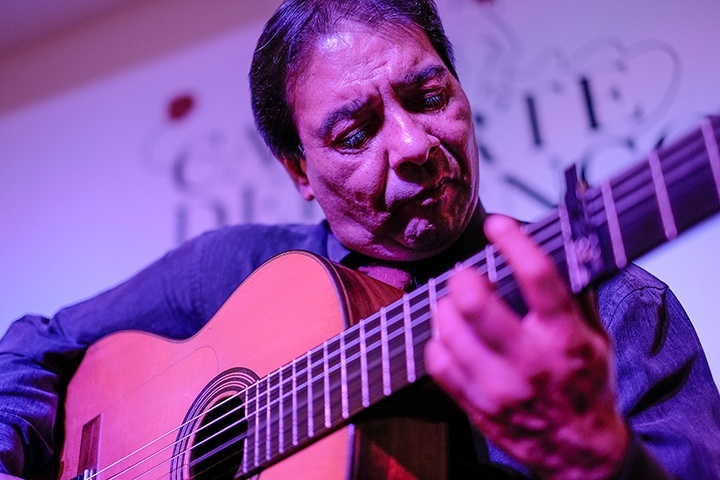 Granada is not a capital of flamenco only for being in the south of the Iberian Peninsula; it is a neuralgic place of this culture thanks to the artists who grew up here. The Nasrid province of Granada has always had a number of cantaores, bailaroes or guitarists, who ended up triumphing worldly: los Morente, the cantaora Marina Heredia, but also los Habichuela, one of the most famous flamenco dynasty with the greatest impact.

Juan Carmona Carmona (Granada, 1933), died in 2016. Although he was not the first of the Habichuela’s lineage – it is said it was his grandfather, Habichuela El Viejo – he is definitely one of those who put the dynasty under the spotlight.

He started as a bailaor but, soon, started playing guitar. It was his thing and he proved it as, in a few time he had gained the respect of the flamenco’s circle: in 1994, he won two prizes: the Compás del Cante award from Fundación Cruzcampo, and the Galardón Calle de Alcalá award on its second edition, from Madrid-born flamenco critics and writers.

Juan developed his carrier and settled as a reference guitarist. He was in New York with Manuela Vargas and played guitar with famous personalities like Manolo Caracol, Marina Heredia and José Mercé. He made Granada and his surname, los Habichuela, worldly famous.

A year ago, José Antonio Carmona Carmona (Granada, 1944), Juan Carmona Carmona’s brother, won a Gold Medal for Merit in the Fine Arts. This was a turning point who turned Pepe Habichuelas, as people call him, into one of the greatest artist in the genre.

In a recent interview published by the daily newspaper Granada Hoy, Pepe said he was born 75 years ago in a cave of Cuesta de Alhacaba hill. He highlighted how flamenco changed and how it became more important. “Now, things are put in their proper place: flamenco is one of the most important music genre of the year”.

Pepe Habichuela, who played guitar in the caves of Sacromonte at the age of 13 when “flamenco artists were completely disregarded” is now very happy to see how people see this music genre nowadays. He then carried on the interview with the journalist Isabel Vargas, highlighting the importance of his dynasty, los Habichuela, in flamenco’s stunning growth: “We, los Habichuelas, created a style with a special way of playing guitar. We have a unique signature.” A signature they achieved through efforts and hard work, of course, “by playing very vigorously and frequently; there were always many people, rounds of applause and many people raising their voice”.

As you can read on his data sheet, – you can also see the other artists’ data- he was born on August 14, 1961 in the cuestas del Albaicín bajo and he is Juan and Luis Habichuela’s nephew, but also Tía Marina Habichuela’s grandson.

Since he started playing guitar at the age of 9, Rafael has been able to play along with cantaores like Carmen Linares, Enrique Morente or José Mercé because, just as he narrates “He is a folk music lover” but also an expert in setting the tone for the cantaor, to give the perfect touch, just as Juan Habichuela himself did.