History of flamenco dress, past and present 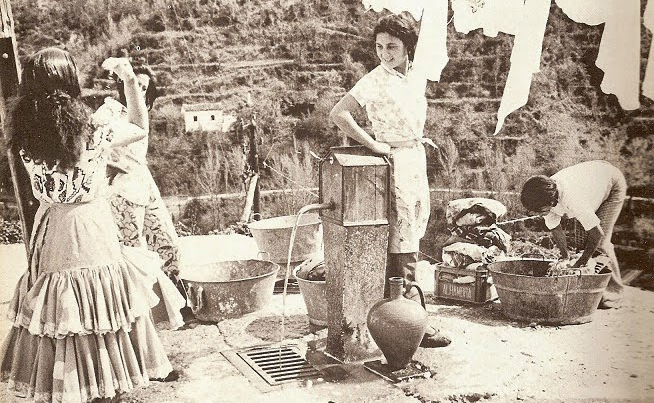 The history of flamenco dress plays an important role in this musical style whose three main elements are singing, percussion and dancing. We cannot forget that in every show, the staging plays a very important role, as well as its costumes.

The flamenco dress is a very distinctive element in flamenco shows, and that is why from Casa del Arte Flamenco wanted to dedicate this article to talk about its history, as well as its evolution through the stages and regional parties.

To date flamenco dress’ origin in the 19th century livestock fairs would be too simple, at least if we take into account Rosa María Martínez Moreno’s book “Dressing in flamenco or by tradition came the grace”. There are several facts that made this suit occupy the privileged position it has today, and they all deserve to be mentioned.

All historians agree Andalusian peasants accompanied their husbands to the livestock fairs dressed in the frilly coats they wore during their daily chores. And lately these robes ended up attracting the attention of bourgeois ladies and they began to perfect the suit with more exclusive and delicate elements.

But we cannot ignore the great role romanticism played on flamenco dress. Its authors dedicated themselves to disseminate throughout the world “In Andalusia misery has always been dressed fancy”. On this way they made popular that Andalusian citizens cared about their appearance.

Another relevant date is 1929, the year in which Seville’s April Fair became official as a playful meeting. Since this year it left aside its initial commercial origin. Besides during that same year Ibero-American Exhibition of Seville was held, where flamenco dress was institutionalized as a typical costume for wearing during fair.

In addition during these years took place the professionalization of flamenco. In this way the cultural elites were getting to know the popular dress gypsies wore during their shows.

Therefore, we can see that there are several facts that end up making the flamenco dress so popular nowadays. All this, although much more recent, we must add the opening in 1994 of the International Flamenco Fashion Show (SIMOF), which has become an international showroom for flamenco dress since then.

It was the set of all these events that gave flamenco dress the important name it has today, creating an important fashion business around flamenco and its costumes.

Flamenco fashion sector grows every year, and it is estimated only in 2017 its exports, which represent a little less than 50% of total, managed to raise 120 million euros. We are talking about a niche forms by 7.000 companies and 20.000 workers. On this way we can get an idea of its importance.

If we have to emphasize an aspect within flamenco dress we stay with its unique timeless character. This is the only traditional costume that has managed to combine tradition and modernity. It is a suit that thousands of women dress each year, adapting it to new trends, without losing their gypsy personality.

Flamenco dress has been in contact with haute couture thanks to artists such as Vittorio & Lucchino or Yves Saint Laurent, and despite of being a customizable dress, presents a series of immutable elements: its cut at the waist, as well as its original flyers.

There are many changing elements in this suit, whose carrier can customize according to their preference. We can talk about different types of neckline front and back, different types of flight in the skirt, or a wide variety of sleeves. In fact, in recent years we have been able to see different dress lengths.

To all this we must add accessories play and important role in flamenco dress. Hair accessories such as combs and flowers, shawls, and even fringes and lace are essential for this costume.

Flamenco dress’ evolution to this day

But within all these variants we can highlight certain trends that have marked and modified the flamenco dress since the last century.

It was during the 50s when flamenco dresses were adorned with ribbons and large satin bows. In addition it was imposed bulky sleeves and shawls crossed on the chest.

The 80s overloaded flamenco dress, with many more ornaments and patterned fabrics. Also dress narrowed until taking a more suggestive shape. As a result, necklines and hips became more marked.

In the 90s flamenco costumes became more moderate, leaving aside all kinds of ornaments. A new concept of flamenco dress was created, less adjusted, but vaporous and sensual. In these years, we highlight the colours with simple polka dot mottles.

During XXI century we have witnessed revolutionary change on flamenco dress, mainly influenced by current fashion trends. That is why dresses with fringes, transparencies, or even daring prints have paraded through fashion catwalks.

Therefore, we can only conclude that traditional flamenco dress has become an entire piece of adoration. This is mainly the great reception it has had at a social level, along with his great role in flamenco world, and its changing and lively nature. That allows flamenco dress to be in contact with current trends, without losing sight of his origins.

We hope you have enjoyed knowing about the history of flamenco dress, and we encourage you to take a look to our blog and discover more about flamenco culture.