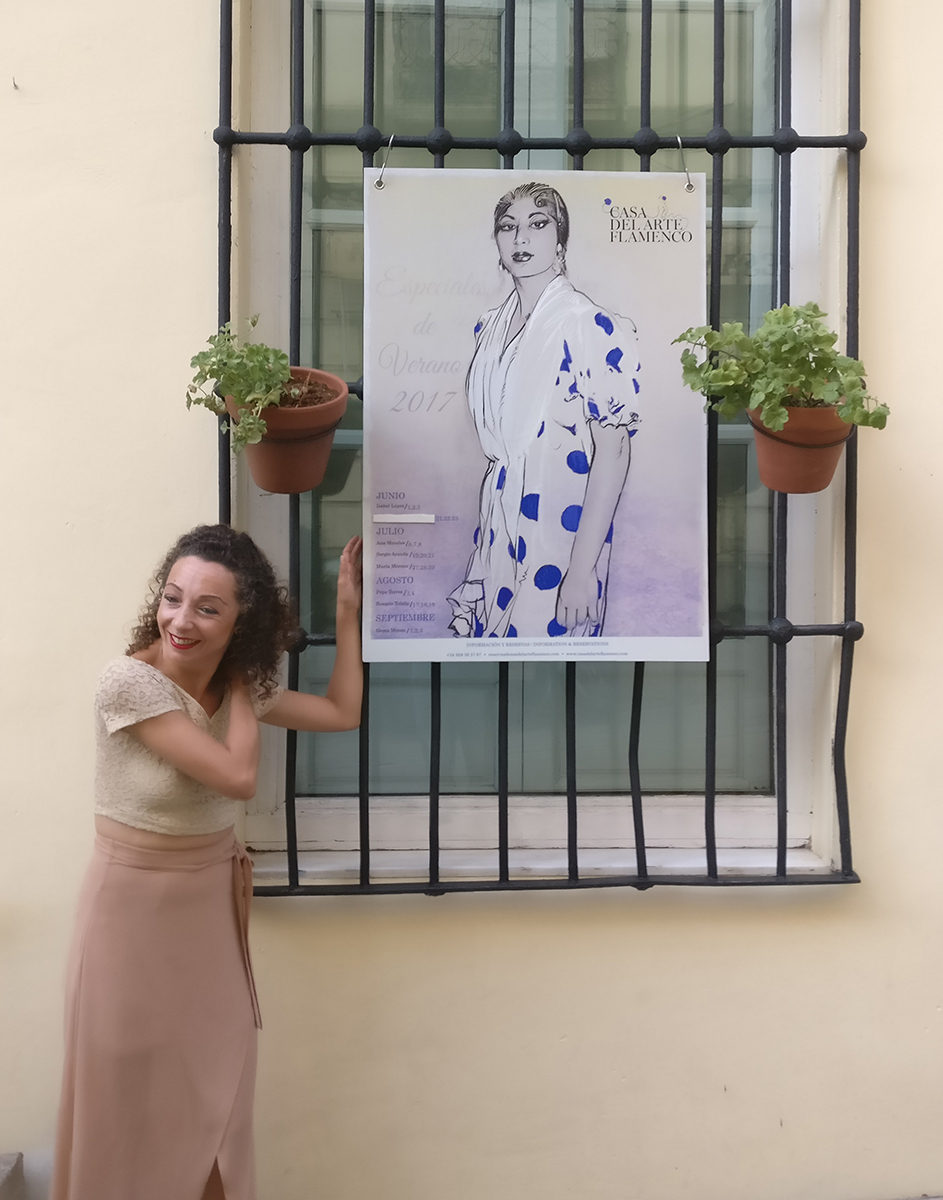 Casa del Arte Flamenco is something unique. A small tablao, cozy and intimate, like a little box where you hold your most valuable jewels. Something closed, precious. The straight contact with the public makes the performance different.

My first steps in the world of dance is born where I was, in Cádiz. I started studying Classic & Spanish Dance when I was 9. When I was 12 I met my master, Charo Cruz, by her hand I step into Flamenco.

I started my Flamenco Dancer career with Charo. She had the hability to bring great masters, from each one of them we learned a lot, among them Manolete or Eva Yerabueba. Was a period of raw learning. My debut as dancer happened when I was 13. With Manuela Carrasco. Later, when I was 19, I won 2 national awards in Córdoba and in 1999 I won the second price in the dancing contest of International Festival of Las Minas de la Unión.

Apart from being a well known dancer, Rosario Toledo accounts with several productions. About them she says:

When you have an inquietud, a need for a pursuit, you have to put all you have with you to make it come to life. I´m a very  concerned person… i like to jump into every mess… It´s a real headache, but as the saying says, If you like the scratching then you do not mind the lice. My last production is ADN, it was presented in Jerez Festival.

Right now I´m working in Amazonas, a production of Juana Casado. This show mixes different performing art disciplines , with 9 women as main characters, each one of them equally impressive. Is very different when you perform in the production of someone else, you feel relieved, free and relaxed to do your job.

When it comes to her career path in Flamenco, she remembers with warmth the different tablaos where she has been.

I miss a little bit more of tablao´s school in Cádiz. My houses have been always El Cordobés and Los Gallos. There is where I made my first steps and where had the honor to learn from some of the greatest artist ever. But there are many others. Casa Patas, el Corral de la Morería, Sala La Claridad… what fills you more as an artist is to do your thing. In the tablao you have to show how much are you worth, in front of the audience, it has some parts alike with the theatre, yet another discipline that I love, a completely different school.

When she´s asked about her models she doesn´t let anyone out.

Each and every one of the artist that I had the honor to act with has his special thing. Charo was my master, Mario (Maya) was an inspiration. He discovered me in Córdoba after I won those two national awards. None knew me then and he became in my master, everything he said was a lesson. But not only him, there have been many others along my career that have taught me. Carmen Amaya, Rafaela Carrasco… with Grilo I learned a lot, with Javi Latorre aswell, all his school and discipline… his rinconete.

My models are not just dancers. I love singing a lot, same happens with the guitar. You have to see and feel everything.

About our tablao, Casa del Arte Flamenco. Rosario points out the impression of the space.

Casa del Arte Flamenco is something unique. A small tablao, cozy and intimate, like a little box where you hold your most valuable jewels. Something closed, precious. The straight contact with the public makes the performance different.

From her days in the Nasrid City she remarks an experience. The tribute to Lorca organized by Curro Albayzin.

Whe were in that wall, the same where those 4.000 where shotted. Is something that trascend the art, is something… more spiritual. Is our art, those people, those candles, that sky full of stars. This tribute is something that Curro started, for me he is like a shaman. Something unique where those poems are mixed with our way to honor, the only one we know… is something amazing.