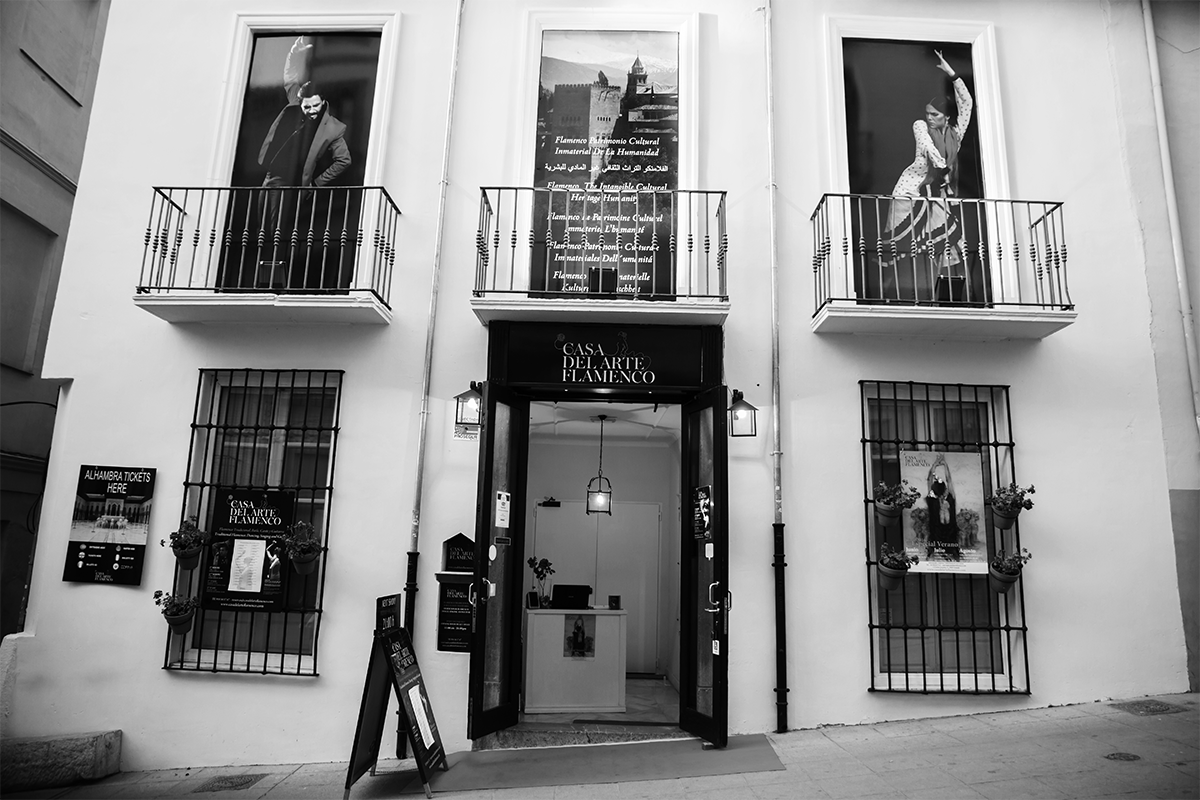 Casa de Arte Flamenco started his path on April of 2013. Their managers had more than 15 years of experience on their backs when they decided to open this theatre in the core of Granada. By Plaza Nueva, right under the shadow of the Alhambra.

The city of Granada already had a long flamenco tradition, but Casa del Arte Flamenco was founded on a brand new niche. Flamenco in the Nasrid city was all condensed in the district of Sacromonte. The traditional gipsy quarter where the Zambra was born by the bonfires and the caves.

Casa del Arte Flamenco stepped away from the cave concept and betted on a small theatre concept. Opposite to the caves, the flamenco shows started earlier in the afternoon instead of the night. Another important diference, Casa del Arte Flamenco doesn´t serve food or drinks so the audience is fully focused on the flamenco show, with no distractions at all. This concept makes the whole flamenco show be more related to the Peña Flamenca rather than the Zambra itself.

The beginning wasn´t easy, but every year since the opening Casa del Arte Flamenco gains a better appreciation from both the public and the experts. Their far-term objective is to become a national Flamenco reference.

The foundation of Casa del Arte Flamenco was based on three pillars. The love for the flamenco, his roots and his essence was the first one. The total respect for the tradition of the Sacromonte was the second. The third was to bet for the local artists. Of course there are flamenco shows where national top artists from Jerez, Seville, Cadiz or Madrid perform, but the day by day rhythm is marked off by local artist like Raquel La Repompa, Alba Heredia, Cristina Aguilera, Vero La India, Saray La Pitita, Esther Marin, Lucia Guarnido, Adrián Sánchez, José Núñez, Luis de Luis, Ray Benítez, Javier Martos, Iván Vallejo, Juan Ángel Tirado, Amparo Heredia, Raúl Molina, Irene Molina, Antonio Campos, Luis Mariano, Manuel Fernández, Rafael Habichuela or Rubén Campos.

This summer Casa del Arte Flamenco began to offer special flamenco shows with the performance of some of the most valued artist in Flamenco such as Pastora Galván, La Lupi, Antonio Molina “El Choro”, La Piñona or Gema Moneo. They were a total success and achieved a success that was unimaginable 3 years ago, when this Flamenco Theatre was founded.

According to the well known platform Tripadvisor Casa del Arte Flamenco is among the best flamenco shows of Granada. Since it´s foundation it has been between positions 1 and 2. Nowadays is the one that receive most feedback from it´s customers, most of it pointing out it´s outstanding quality.

Another risky bet is the calendar. Casa del Arte Flamenco is opened 365 days every year, two flamenco shows every day, performing even in New Year Eve and Christmas.

For an immediate future Casa del Arte Flamenco is going to expand it´s offer by serving a wine tasting on the first floor of the theatre before every pass. Attendants will taste a Grenadian Wine and will receive a bottle after the tasting. Still no drinks will be served during the show.

The philosophy beyond the whole concept of Casa del Arte Flamenco  can´t be understood without understanding the very roots of Grenadian Flamenco. This roots are deeply inside the ground of the Sacromonte. Casa del Arte Flamenco doesn´t intend and indeed does not compete with the caves. The Zambra itself is a theatre divided in 3 parts. The Alboreá, the Cap and The Fly, each of them is one part of the Gypsy wedding ritual, all together is a masterpiece linked to Granada and its very own soul. Casa del Arte Flamenco understand his role in this place and presents itself closer to a theatre of diverse traditional flamenco styles rather than stepping into the Zambra, wich belongs and will belong to Sacromonte.