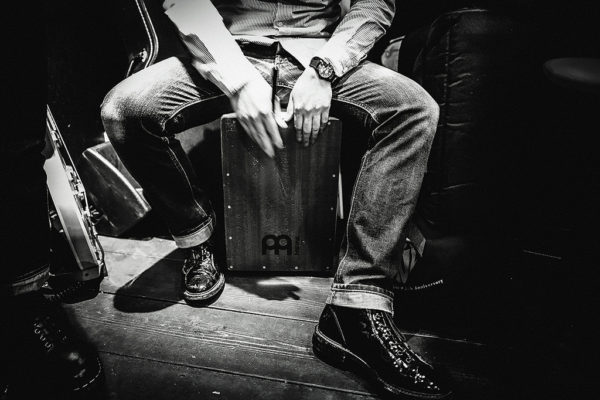 The cajon box drum became the main percussion instrument in Flamenco not long time ago. If you want to know how it became such a fundamental piece in Flamenco, keep reading.

From Latin America to Andalusia

The story o of cajon box drum in Flamenco starts in the 50s of Brasil. There is where Ruben Dantas was born, the one who became worldwide known as Paco de Lucia’s percussionist.Rubem was born surrounded by music, and at early age he started to show his skills at instruments, specially when it came to percussion instruments. In 1976 he decided to change continent and moved to Madrid, dreaming about being able to introduce a percussion instrument in Flamenco.
There in Madrid he started to have relationships with famous musicians as Pedro Ruy-Blas. It was Pedro who offered Rubem to join to the proyect Dolores. Dolores was a five members music band consisted of Jorge Pardo, Jesús Pardo y Alvaro Yébenes, besides a Rubem Dantas and Pedro Ruy-Blas. It revolutionized Flamenco style at its moment, thanks to its new and different way to play it.
Due to this project Paco de Lucia and Rubem Dantas met along the way, and the Brazilian musician became the great Paco de Lucia’s percussionist, in the project Sexteto.
During one of them tours around Latin America those six musicians run into the box drum, in Peru concretely. The music band was invited to a celebration to the Spanish embassy in Peru, where a famous female musician, Chabuca Granda, next to her percussionist, played a well-known song called La flor de la canela (Cinnamon’s flower) using the box drum.
Only few minutes were required to Rubem and Paco to fell in love with that sound, and they decided to make that box the official flamenco percussion instrument.

Why the cajon box drum?

Before the box drum was used there was not an official flamenco percussion instrument. Musicians commonly used hands and heels to accompany the music, but the physic effort was too much to resist a long performance. However the sound offered by box drum has a lot more consistency and accuracy.
Knowing how to play it, the musician is able to achieve the high-pitched sound of one heel and the deep sound of the palms of the hands. It is just needed to play in the center of the box or in its edge.
Besides to this consistency and accuracy, we cannot deny that shape and size of box drum are perfect for its transport. In addition it is an instrument cheap and available, with it fits perfect with Flamenco spirit, a street music style.
All this made this instrument had a warn acceptation and fast expansion. Only six months after its official introduction box drum is was used by all flamenco music bands and it became the official flamenco percussion instrument.

Spanish people relate box drum with Flamenco , however not always has the prestige it has nowadays.
There are some reasons that made cajon box drum was few known in its original country. The first reason is it is a marginal instrument, which means it was threw away by rich people and it was used to play music in modest neighbours.
Now recycling is a well-accepted practice, and so many instruments are made by used material. However, a century ago this habit is was unpopular, and music from modest neighbours it was not listened very often.
During a long time, box drum was not even considerate a proper instrument, due to it lacked the membrane percussions instrument trend to use.
It was necessary Paco de Lucia and Rubem went to Perú to spread this instrument all around the world and to make if famous as the Flamenco percussion instrument.

Rubem Dantas’ style was the official way to play the instrument during some years, due to he was the one who introduced this instrument to Flamenco music.
Some years later, when box drum was not considerate as an innovation, other great artists as Antonio Carmona transformed the way to play it. Antonio evolved the technique by giving a more Flamenco style.
Just to conclude, we want to add that Rubem Dantas and Paco de Lucia are very proud of contributing on Flamenco the way they did. Thanks to them Flamenco has more consistency and accuracy. Besides, Rubem Dantas has confessed he is especially happy to make a traditional Latin American instrument so famous worldwide.