The origin of Tablao Flamenco 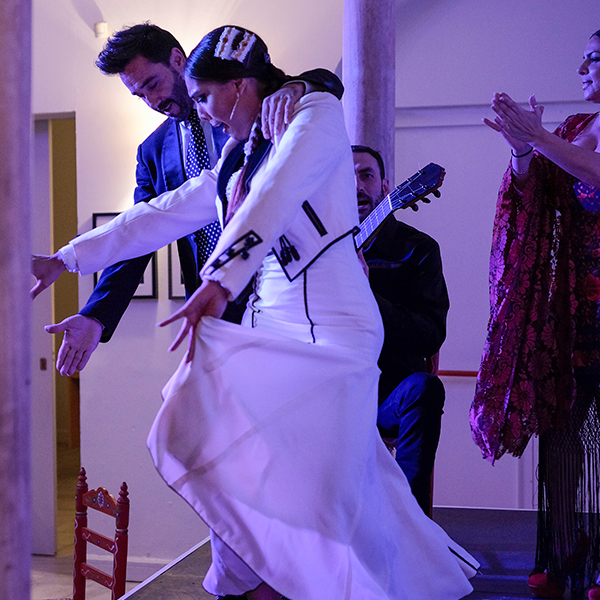 Flamenco tablaos get their peak with the evolution of the singing cafes of the mid-nineteenth century. Also called “Catedrales del Duende”, the truth is that flamenco tablao was of great importance for the development of this art.

The origin of this musical genre was the combination of Andalusian music and dance, with the contributions and personal touches of the gypsy ethnic group. The palmas, the zapateo, the cante and the baile, are the flamenco bases and the flamenco tablaos, the place of representation that took them to the top.

The singing cafes were usually formed of a spacious and well decorated lounge with chairs and tables for the public. In the central place was the tablao, representing the place where flamenco, after a period of restricted exhibition, finally appears before a large audience. It stops being an art of the minorities, to begin to have popular roots and diffusion.

Flamenco tablaos emerge at a time that has come to be called the Golden Age of Flamenco, between 1860 and 1919, because it is when it develops in all its facets: singing, dancing, instrumental … until it is fixed definitively what we know today with the term flamenco jondo.

At this time, flamenco dancing flourishes with unprecedented splendor, being the main attraction for the public of the singing cafes, and the use of the flamenco guitar as a key and indispensable complement to cante and baile begins to be promoted. Until then, flamenco was not accompanied by a guitar, but rather it was produced without any instrument, loud and clear, simply.

During this stage three flamenco schools of great relevance were formed that stand out for their contributions to the flamenco tablaos: Cádiz, Jerez de la Frontera and the Triana neighborhood, in Seville. It is at that moment when flamenco dance begins to distinguish between Spanish dances.

But it will not be until the years 1910-1955 when flamenco singing is marked by what is known as the stage of the Flamenco Opera. In this second period, the great singers who develop flamenco in all its aspects stand out. The round-trip cantes or the fandangos acquire effusive prominence and notoriety, and the guitar becomes indispensable.

From 1955 the world of flamenco tablao continues to evolve to become a universal art although Andalusia, naturally, continues to be the capital and cradle of flamenco in an immovable way, being where it is most concentrated and most frequent.

Art and happiness filtered into the dark Spain of that time, the smell of manure was replaced by the scent of expensive perfumes and selected wines, and the mujidos of the cows gave way to the brave flamenco quejío. The main characters of the world of show business and politics approached flamenco tablaos to be seen.

The photographers and reporters of the time also began to echo the flamenco revolution and even the Hollywood stars who passed through Spain or came to film some of their films did not want to miss a good flamenco party. And of all the Spanish cultural oddities, flamenco may be the rarest. In the course of its history it has been the expression of a minority race as remarkable in our culture, the gypsy race, and the world of flamenco tablao has been marked by pain, persecution and hardship. So much that it was even used by the last military dictatorship to promote the brand Spain in the rest of the world and knew how to adapt and survive to the present, forming an expression and sign of the Spanish cultural modernity.

The flamenco tablaos have a lot of torn and humble art, it is the song associated with hard works such as the forge, but they also lived an era of enormous splendor, becoming a great tourist attraction during the 60s, being an art that all those who They came to our country, they wanted to live very close. It was a time when great flamenco singers such as Camarón de la Isla or Enrique Morente emerged, and guitarists like Paco de Lucía, who were supporters of the modernization of flamenco and passed into the hands of record labels.

Today flamenco is a universal art and flamenco tablaos are part of the most famous theaters and festivals, inside and outside our borders. So much so that, to this day, there are new trends, mergers with other musical styles¸ etc., which are sometimes attacked by the purest flamenco defenders, while others defend it and are more interested in its permeability evolution . Be that as it may, the flamenco tablao currently moves through the five continents thanks to the Flemish artists who spread it and this has led to a new era, where more and more people want to witness their grace, their strength and their duende.