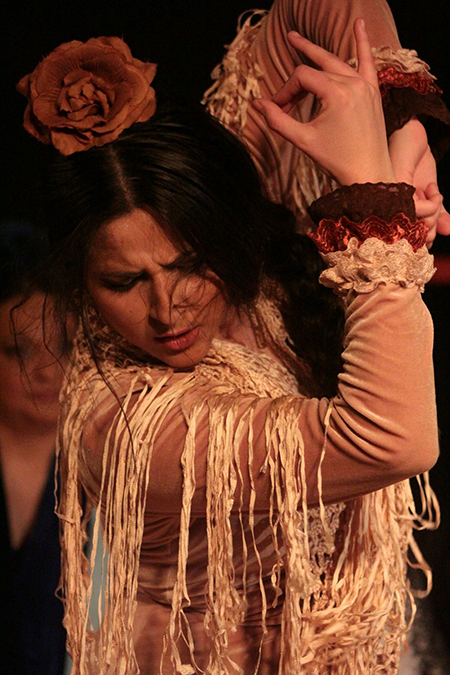 They say that spring fills our world with light and joy, makes the stems sprout and the flowers bloom, they say that spring is hope and life. In Jerez, the arrival of spring was approximately one month ahead, with the start of the XXII Festival de Flamenco de Jerez, which revolutionized these first beats of 2018 and filled both Jerez and visitors with light, joy and feeling.

This new edition of the Festival de Flamenco de Jerez, which took place mainly at the Teatro Villamarta, filled our senses with innumerable surprises, all accompanied by the art and the feeling of the artists who were lucky enough to be able to act and  delight the attendees. But what were those surprises that did not leave anyone indifferent?

Without a doubt, the surprises were countless, although the ones we can highlight were the following

THE EXPECTED AND SURPRISING UNION BETWEEN FLAMENCO AND CARNIVAL

Cádiz is known as the land of carnival, the chirigotas flood the city throughout the year and even more in the months before the official date of the carnival. I could not miss the XXII Festival de Flamenco de Jerez, a nod to the carnival, heritage and culture par excellence of the Andalusian province.

The reflection of the carnival in the festival could be seen in a series of ‘tanguillos’ that spoke and showed the events that took place in the year 57 (as a chirigota), putting them in common with events that occur in Spain at present. These beats were interpreted and danced by four gaditanos (group called ‘Qué pasaría si pasara’) that did not left anyone indifferent and were widely applauded by the audience.

THE MEMORY OF CAMARÓN, JUANITO VALDERRAMA AND CHANO LOBATO

Another of the most outstanding and emotional moments of the Festival de Flamenco de Jerez was when the interpreters of ‘Qué pasaría si pasara’ remembered and honored the flamenco greats such as Camarón, Juanito Valderrama and Chano Lobato.

As a game, they took to the Villamarta de Jerez theater the history and the art of the purest and most sentimental flamenco. The audience was thrilled and surprised with this nod to the origins of flamenco, without a doubt it was one of those moments to remember.

On Thursday, March 8, another of those moments took place for the memory at the Villamarta theater. Thanks to his brilliant work called “Aviso: Bayles de Jitanos”, Antonio Molina, popularly known by his nickname ‘Choro’ won the applause of the whole audience and with it, the recognition by the world of flamenco when winning the revelation award . Without a doubt it was one of the most impressive moments of the Flamenco Festival of Jerez.

AN OPENLY FEMINIST PROGRAM FOR THE MONTH OF MARCH, MONTH OF THE WOMAN

Undoubtedly, she stood out above all else the solo dance of Rafaela Carrasco, popularly known as ‘Sombra Negra’, with her ‘alegrías’ and ‘soleá’ who managed to fascinate us again with the purest and most primitive flamenco, the flamenco that shows above all, the claw and the feeling of all those who dance and enjoy it. A performance that raised the audience amid loud applause.

The Cádiz-born artist Gema Moneo received during the XXII Festival de Flamenco de Jerez a more than deserved revelation prize thanks to her exciting show ‘El sonido de mis días’, performed at ‘Sala Paúl’ during the cycle of ‘Mujeres con nombre propio’ (women with their own name) included within of the XXII Festival de Flamenco de Jerez. An award that recognizes the work and talent of a woman from Cádiz with her own name, a prize more than deserved for all those women who struggle every day to achieve their dreams and be recognized by society.

Undoubtedly, an award that both the public and the critics praised thanks to the impressive work done by both Gema and their families, the Moneo Lara (a family well known in the city of Cádiz for its links with flamenco).

This great bailaora is already one of the regular artists of our tablao and we can announce that Gema Moneo will be next 15, 16 and 17 of April at Casa del Arte Flamenco. Without a doubt, it is an unbeatable opportunity to enjoy the art and emotion that is wasted by this new ‘revelation prize 2018’ and that will delight all attendees.

This Festival of Flamenco de Jerez, number XXII has given us innumerable moments like those commented above. Moments for the delight and enjoyment of all the senses, moments for the memory and for the tribute, without a doubt, a festival that will take a long time to be erased from our memory and our retinas.